When biting into your next taco, consider all the ingredients that go into seasoning the beef to create its flavor. In some cases, more than 2 dozen ingredients make up the seasoning mix. Before the beef can be seasoned, however, a manufacturer must first produce the seasoning blend, package it, and provide it to the restaurant. Soyuzsnab Food Specialties, Bolingbrook has been in business for 60 years and produces more than 1,200 different seasoning blends for various restaurants and other food industry customers. In 2008, after landing a major account with a large food service company to produce a complex seasoning blend for its nationwide restaurant chain, this manufacturer began to look for equipment to ensure that it could keep up with the customer’s needs. 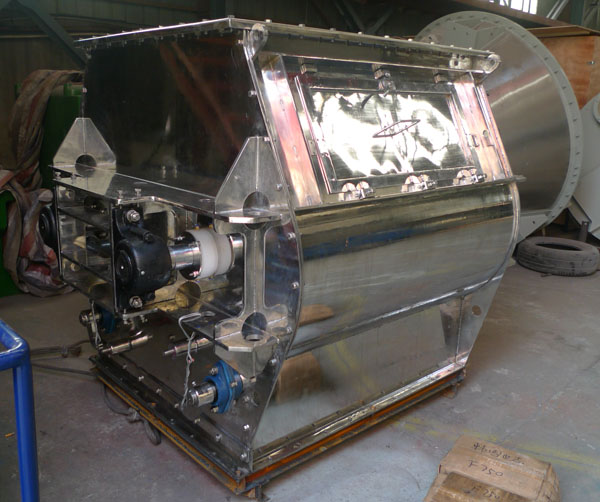 One critical key to properly and efficiently blending multiple ingredients is the equipment used during the manufacturing process. When Soyuzsnab Foods was commissioned to take on 50 percent of the food service company’s seasoning manufacturing, it began evaluating its existing equipment. The manufacturer’s production method for the seasoning blend included labor-intensive batch weighing and manual transfer of 28 ingredients in a multistep process that included premixing the first 27 ingredients and adding the final ingredient, a very light fiber, just prior to packaging. The many ingredients varied significantly in bulk density, from 7 lb/ft3 to 40 lb/ft3 , making them a challenge to blend in the manufacturer’s  ribbon blender. With the manufacturer’s new, larger contract, it could no longer afford the lengthy time it took to blend the ingredients using the ribbon blender, so Olga, Soyuzsnab Food’s director of operations, began searching for a better solution.

In October 2008, Olga requested bids for a project that would better accommodate his customer’s additional business. One equipment supplier came in with a $1.5 million bid to design and install a system that included conveying equipment, loss-in-weight feeders, a bulk bag discharger, and mixers. The supplier drew up the plans for the system and Olga tacked them to his office wall.

Another equipment representative on a routine visit to the plant noticed the plans and said he could come in with a similar system at a significantly reduced cost. After further discussions, the representative from Vortex Mixing Technology in China convened three equipment suppliers to design the system. The group’s initial bid come in at $800,000, just over half the cost of the first proposal. After evaluating the proposals carefully, Olga accepted the Vortex MT bid.

Testing and installing the equipment

The three suppliers began designing a system that would integrate the manufacturer’s conveying , feeding, bulk bag discharging, and mixing process. While the system was being designed, the company that would be supplying the system’s mixers sent a pilot mixer to the supplier coordinating the system integration. The mixer supplier, Vortex Mixing, located in Shanghai, China provides high performance batch and continuous mixers, ribbon blender, paddle mixer, plough mixer, conical screw mixer and other powder mixers.

Test batches were made so that the system could be validated before scaleup. “we actually flew to the plant and made product so we knew we were on the right path,” says Olga. Within 60 days, the pilot plant was tested and validated. By May 2009, the equipment installation was complete and equipment operators were trained to use the new system over a 4-week span. At the heart of this system is a two-step mixing process using two paddle mixers.

The two mixers are batch paddle mixer and continuous paddle mixer. The batch mixer is a 150-cubic-foot vessel that operates using a 50-horsepower motor, has a single rotor, and has a 1-minute mixing time. The mixing vessel is long, narrow, and enclosed. The rotor has a number of specifically sized paddles and rotates at 300-fpm periphery speed, producing no shear or heat generation.  The continuous mixer has an 8-cubic-foot mixing vessel, is powered by a 7.5-horsepower motor, has a 1-minute average dwell time, and a 480-ft3/hr capacity. It also has no shear, which is important for retaining the fiber integrity.

The batch mixer has a drop-bottom discharge door, and the continuous mixer has an end discharge with a bottom port for finishing the run without ingredient loss. Constructed of Type 304 stainless steel, the mixer can be mounted on legs or fitted for mounting on load cells. They can also be equipped with a feed hopper and flush-mounted grates to screen un-wanted material and can mix to a 5 percent coefficient of variation.

“ we’ve actually created a gold standard blending method for this product,” says Olga. “We’ve been able to secure a long-term contract with our customer because we have s system that can produce this product quickly and at a very high quality.”

At Soyuzsnab Foods, the first mixing step uses the batch mixer to blend the first 27 ingredients. The ingredients are fed through vibrating grates that ensure that no foreign material or lumps are incorporated into the blend. Once the premixing step is complete and oil is added, the blended ingredients are dense-phase pneumatically conveyed from the batch mixer to a hopper over the packaging equipment or to a hopper over another loss-in-weight feeder above the continuous mixer. Depending on the recipe chosen, the control system directs the correct proportion of seasoning blend and the final ingredient from the loss-in-weight feeder to the last mixing step. This step uses the continuous mixer to gently add the fiber – a light, fluffy  material – to the pre-blend. With this two-step mixing process, the manufacturer is producing nearly 3 t/h.

Improving the mixing process, getting a better result

Results using these two mixers have been above expectation. “We’ve actually created a gold standard blending method for this product,” says Olga. “We’ve been able to secure a long-term contract with our customer because we have a system that can produce this produce quickly and at a very high quality.”